We don't charge service fees but request a donationion to the 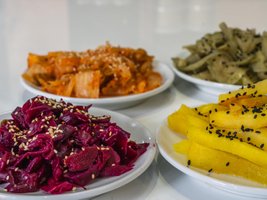 Kimchi is fermented Korean cabbage, eaten for its gut-health promoting probiotics since centuries.

Tempeh is fermented soya so its rich in protein and probiotic! Served with Kimchi and rice. SESAME, SOYA, GLUTEN (Ask for GF).

Kimchi Sausage £14.5
Our cannabis sausage served with two colours of Kimchi of your choice on a bed of rice topped with vegan parmesan and sesame seeds. SESAME, SOYA, ALMOND, GLUTEN.

Raw Bibimbap £14.5
A lighter version of the dish on the left with seaweed instead of rice. Great low-calorie option. SESAME, SOYA, GLUTEN (Ask for GF).

Accompanied by a steamed rice ball.

Kimchi Lasagna £18.5
My own homemade pasta sheets layered between red kimchi and cabbage topped with vegan parmesan and bechamel sauce. Served with a side of spinach. SESAME, SOYA, GLUTEN.

Allergens: We use soya sauce extensively which contains some gluten. Any dish with this symbol CAN be made gluten-free by using tamari sauce, but please do ASK! SESAME and ALMONDS can be removed from dishes if requested but is present in our kitchen.

Probiotic, sparkling drink consumed in East Asia since centuries to boost good gut bacteria. Brewed with tea or infusions it has a taste comparable to a tart cider.